The Fight for Freedom and End to Apartheid 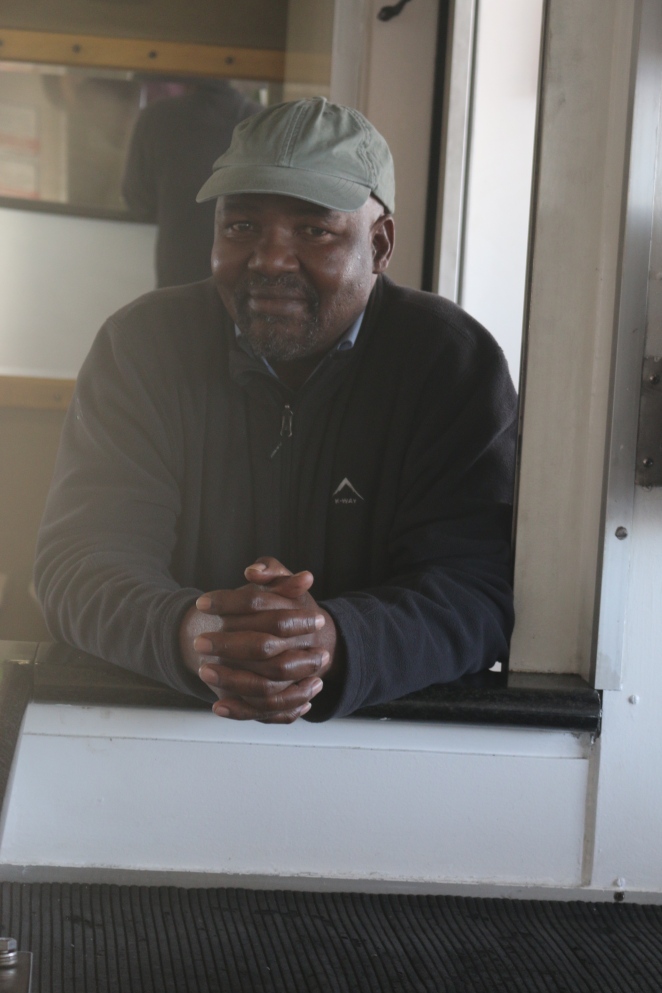 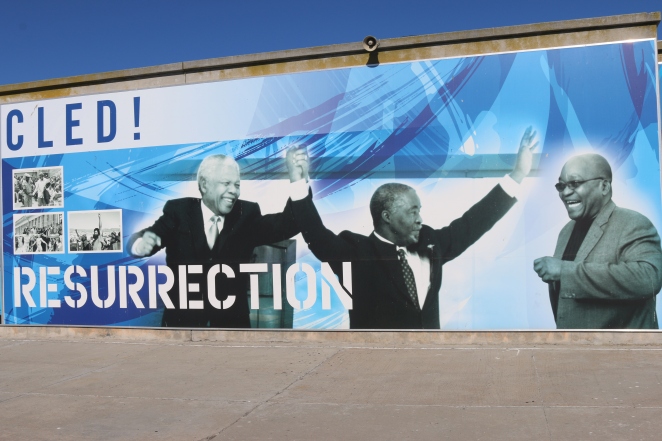 So we got put in jail once again, inmates! I’d like to call this post Jail House Rock II, after our first visit to a jail, in Christchurch, NZ, however, this is serious – it is Nelson Mandela and South Africa’s struggle to end apartheid. 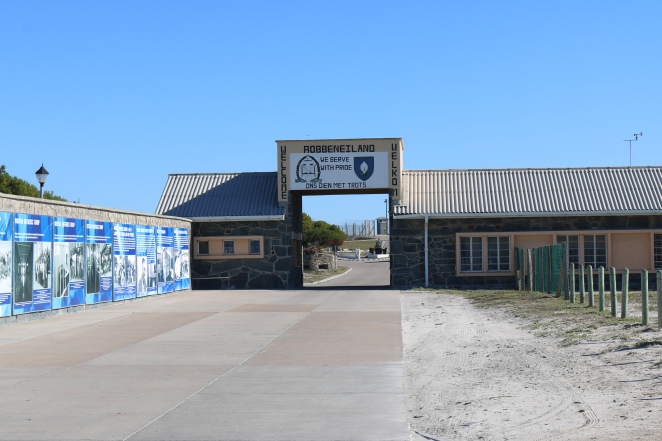 This jail is called Robben Island, sort of like the Alcatraz of South Africa.  This is a UNESCO World Heritage Site, which I will explain in my next post.  If you have ever heard of Nelson Mandela, this is the prison where he was kept. Our tour guide at the prison was an actual ex-political prisoner who rallied with Mandela for rights for black and colored people. This is how they refer to the black people and people of mixed races – even today.  Black and colored people refer to themselves that way, too. 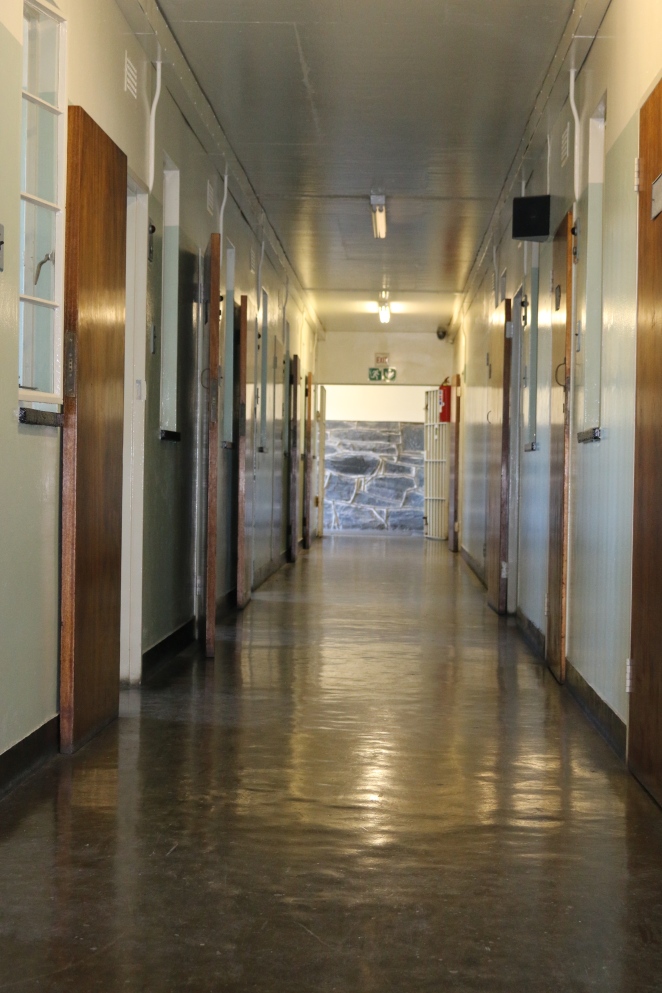 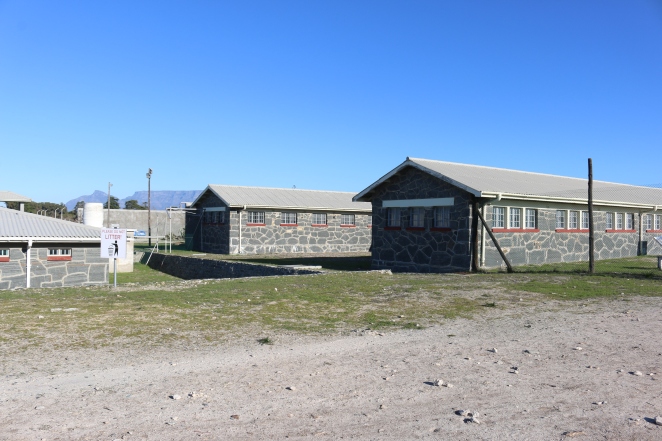 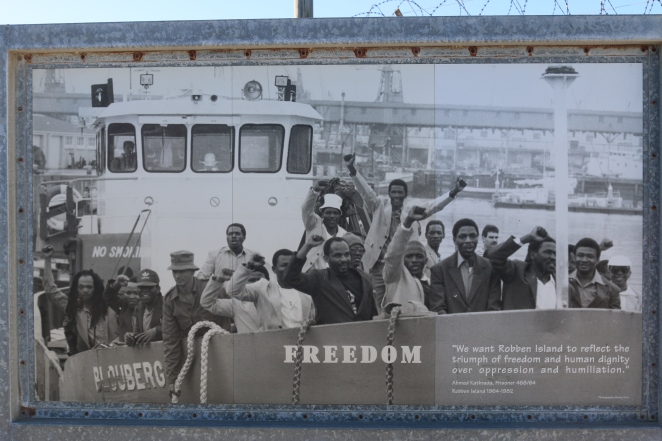 This island has been used for many things – refuge island, asylum, a leprosy colony, and most recently, a prison. 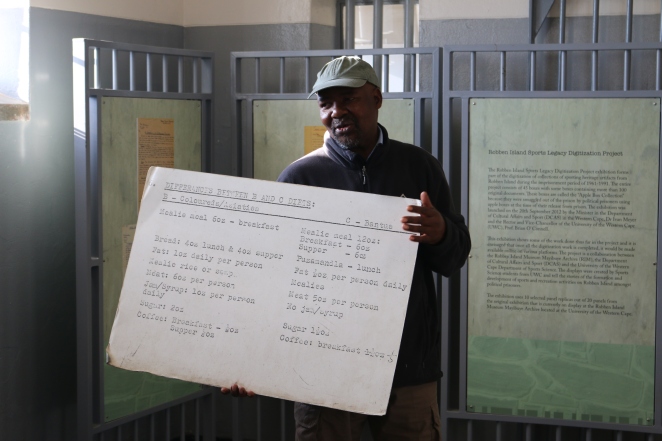 Our tour guide, Mncedisi, was in prison for five years in Robben Island because he participated in a demonstration with his school friends against apartheid when he was 19 years old.

He taught us about his time spent in jail. All the prisoners were sorted into classes, A, B, C, or D class prisoners, depending on how they cooperated with prison officials. 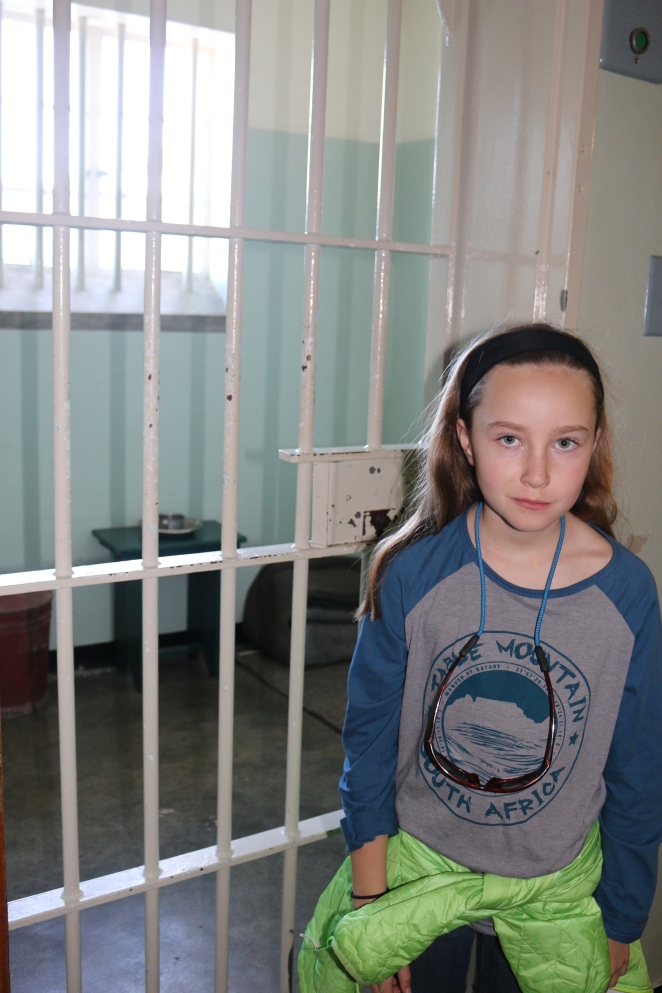 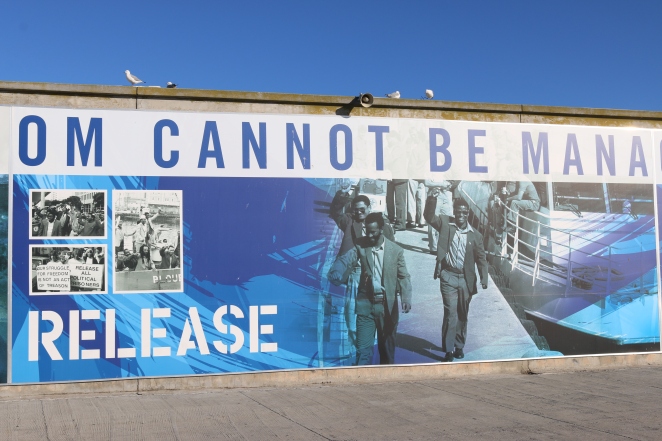 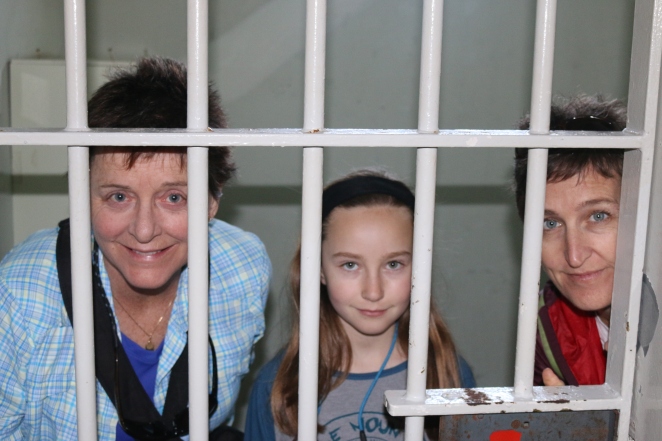 Mncedisi said that they could not say anything about prison life in the letters he wrote to his family and his sister asked him why his letters were so boring. 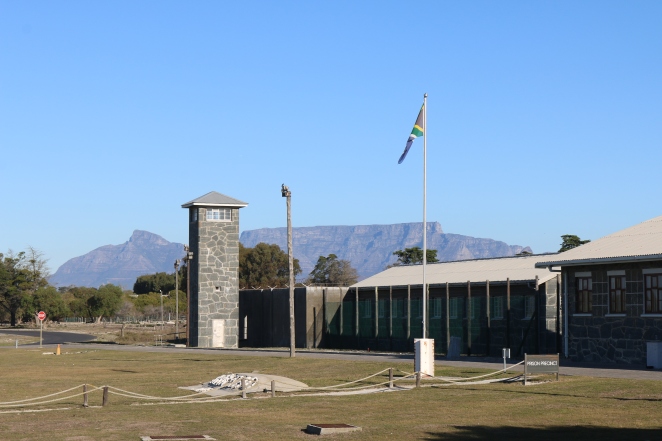 Did you know that political prisoners were treated worse than criminals? How crazy is that? 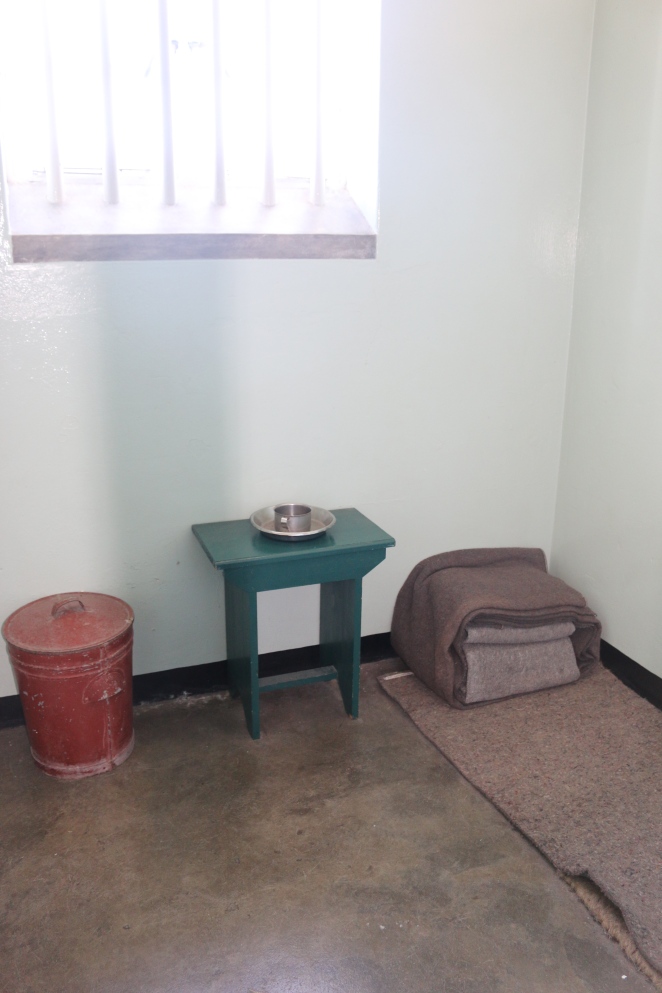 Nelson Mandela’s Cell – for 18 years of 27 years, he was in this cell on a blanket on the floor

I will tell you one more story about Robben Island: The prisoners had to mine limestone for no reason other than hard labor for punishment.  The sun reflected off the rocks and gave many prisoners medical problems, including Nelson Mandela, who was never able to shed another tear because of the damage to his eyes. 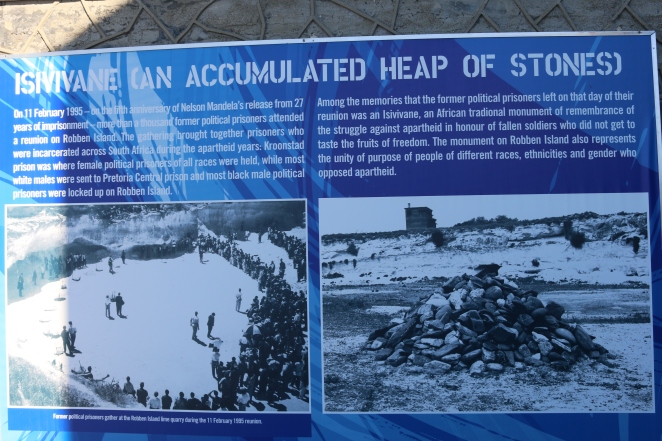 Years after Mandela got released, they had a reunion of 1000 ex-prisoners on Robben Island  where Mandela placed one rock in the spot shown below and every prisoner placed a rock there after him, too, from the limestone area, one on top of another — to form a pile, which is still standing today.  Mandela didn’t plan to put the rock there, but now the pile represents the diversity of the people of South Africa and their fight for freedom and equality. 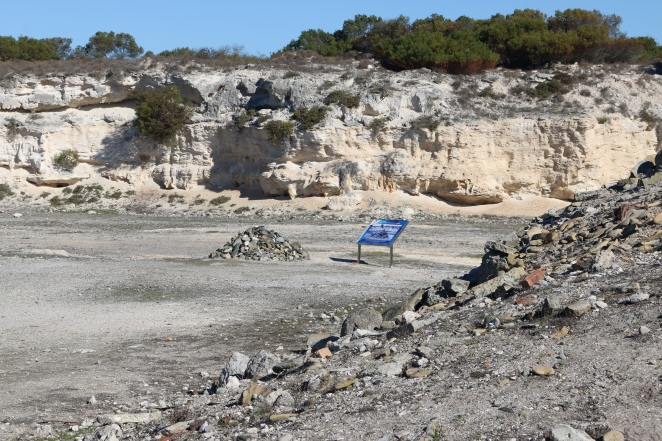 Well this just about wraps it up for Robben Island! 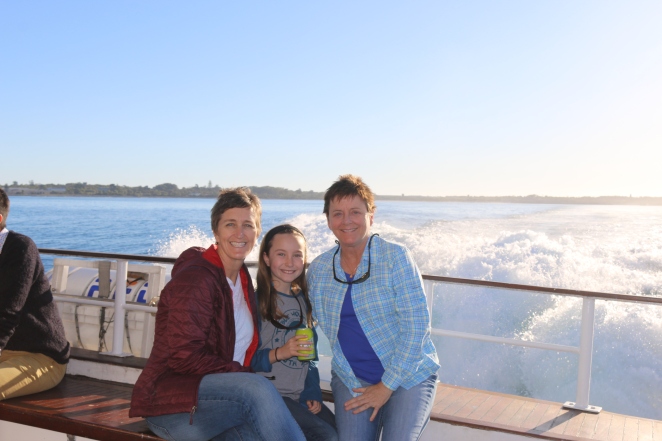 Except — Look for More Posts from your Junior World Trek Reporter. 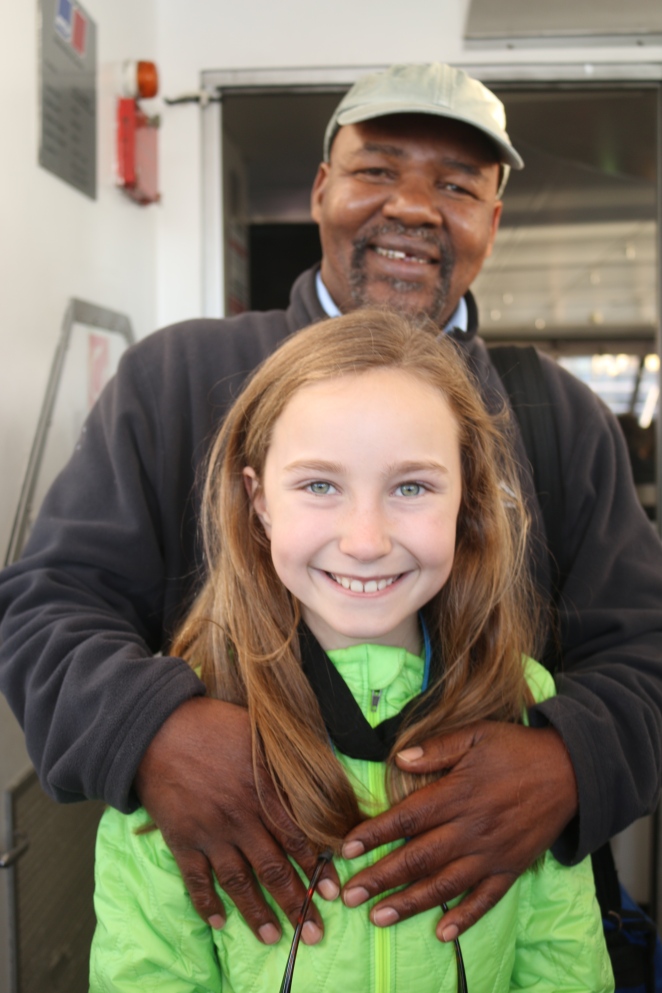 Keep Calm and Travel the World 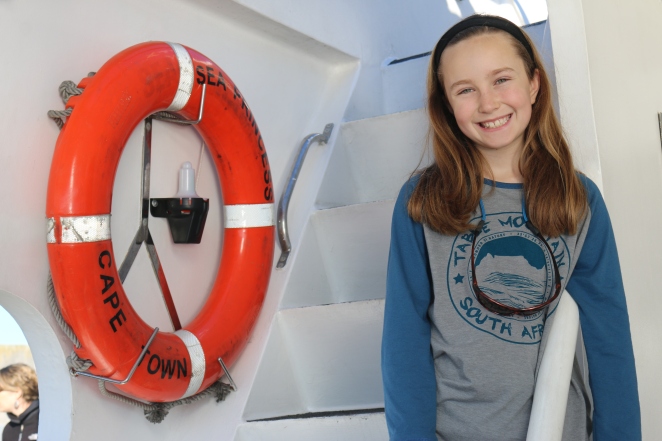 2 thoughts on “The Fight for Freedom and End to Apartheid”